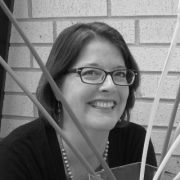 Ms. Flansburg has worked in a number of ways in Oklahoma to make our state more welcoming to immigrants and people of color. She is president of VOICE (Voices Organized in Civic Engagement), leading efforts to help ordinary OKCers learn to be effective in speaking about their concerns & building relationships with leaders & holding them accountable to the people they represent.

Following the Moore & Shawnee tornadoes in 2013, she raised money & organized several churches to reach out to undocumented families in the area who were impacted but unable to access some of the official relief efforts. Over $150,000 was raised and many families were helped. With the funds remaining, and as agreed with donors, the rest was rolled over into a scholarship fund that helps undocumented students pay for college. The first three scholarships have been awarded.

On December 10th, the Oklahoma Universal Human Rights Alliance will honor human rights heroes from around our great state. A recognition program will take place at the State Capitol. Sundra Flansburg will be among those to be recognized. More information about the program can be found here: “Celebrate Human Rights.”

“Recognition of the inherent dignity and of the equal and inalienable rights of all members of the human family is the foundation of freedom, justice and peace in the world.”
–From the Preamble of the
Universal Declaration of Human Rights