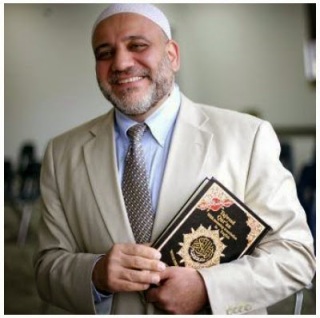 “Sometimes I think God exposed me
to so much hatred and violence.
so that I can be a voice for love and peace.”

We are extremely pleased to announce that Dr. Imad Enchassi, the senior Imam for the Islamic Society of Greater Oklahoma City, will be a featured speaker at our Peace Day event at Oklahoma City University on Sunday, September 21st:

You are invited to join us as we celebrate the International Day of Peace. 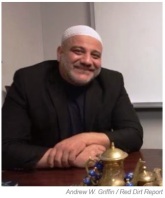 Dr. Enchassi is a renowned voice for peace, interfaith understanding, and religious tolerance in Oklahoma and beyond. He is the recipient of the 2014 Humanitarian Award of the Oklahoma Center for Community and Justice, the “Dialogue Award” of the Dialogue Institute of the Southwest, the Community Service Award of the Interfaith Alliance of Oklahoma, and in 2011 he was recognized by The Oklahoman newspaper as a Visionary in Religious and Education Outreach.

Beyond these many accolades, Dr. Enchassi is a gracious man of gentle humor. He inspires confidence with his knowledge and ability to communicate. He is a highly sought-after speaker.

The son of a Palestinian father and a Syrian mother, Dr. Enchassi grew up in the Palestinian refugee camps of Beirut, Lebanon.

“I am a third generation refugee,” Enchassi recently told The Red Dirt Report. His father was Palestinian, his mother from Syria.

As a teenager, Enchassi and his six siblings were in the Sabra and Shatila camps when they came under attack from the fighters of a Christian militia group. It was September, 1982.

It wasn’t just an attack. It was a massacre. More than 30 years later, the world can’t forget the deaths of so many unarmed civilians. Estimates of the death toll range from 762 to 3,500. The UN General Assembly condemned the slaughter, which stretched over the course of 3 days.

As related by The Oklahoman newspaper: “Enchassi said surviving the massacre made him think long and hard about the power and destructiveness of hatred.”

“I knew that hatred had to stop,” he said.

After surviving the massacre, at the age of seventeen, Enchassi moved to America, beginning a long journey of education. He studied business management at South Plains College in Texas as well as at Southern Nazarene University in Bethany. Eventually, he earned a masters in management from the University of Phoenix.

“Making it to the U.S. was a dream,” Enchassi told the Red Dirt Report. For nearly two decades, he excelled in the restaurant industry as a regional manager and consultant.

ISGOC has grown to become the largest Islamic Center in the state of Oklahoma.

Dr. Enchassi and his wife, Judith, are the proud parents of five children.

Appearing along with Dr. Enchassi at our Peace Day program will be a group of students from Mercy School. They are preparing a musical performance that we’re sure you will enjoy.

The theme will be peace — our common aspirations for peace, our right to live in peace.

You are invited to join us.

“History has shown that, no matter how fierce, conflict can end, peace can prevail and reconciliation can triumph. On 21 September, at concerts around the world — in major cities and small towns, in conflict zones and peaceful communities –- people will broadcast this essential message. They will celebrate the value of human diversity and the strength of our unity.
“…I urge every peace-loving person to engage with their friends and neighbors, their community organizations and governments. Together, let us demand the right of peoples to peace.”