For Supporting Freedom of
Thought, Conscience and Religion

“Everyone has the right to freedom of thought, conscience and religion; this right includes freedom to change his religion or belief, and freedom, either alone or in community with others and in public or private, to manifest his religion or belief in teaching, practice, worship and observance.”
—The Universal Declaration of Human Rights (Article 18)

Rep. James Lankford, Member of Congress for the 5th congressional district in Oklahoma, has been recognized by the members of the Oklahoma City chapter of the United Nations Association for his support of the fundamental rights of religious minorities.

Priya Desai, president of the Oklahoma City chapter of UNA-USA, has written a letter to Rep. Lankford expressing thanks for the congressman’s decision to become a co-sponsor of House Resolution 109.

HR 109 is a bi-partisan resolution expressing disapproval of the Government of Iran “…for its state-sponsored persecution of its Baha’i minority and its continued violation of the International Covenants on Human Rights.”

For years, the Baha’i community has suffered from a lack of protection of their fundamental human rights in Iran. In the ten years following the 1979 revolution, according to the United Nations Office of the Baha’i International Community, more than 200 Baha’is were killed or executed. Hundreds more were tortured or imprisoned, and tens of thousands lost jobs, access to education, and other rights – all solely because of their religious belief. Since 2005, more than more than 710 Baha’is have been arrested, and the number of Baha’is in prison has risen from fewer than five to a current figure of 136.

In March, 2012, the United Nations Special Rapporteur on the situation of human rights in the Islamic Republic of Iran issued a report (A/HRC/19/66), which stated that “the Special Rapporteur continues to be alarmed by communications that demonstrate the systemic and systematic persecution of members of unrecognized religious communities, particularly the Baha’i community, in violation of international conventions” and expressed concern regarding `”an intensive defamation campaign meant to incite discrimination and hate against Baha’is.”

House Resolution 109 recognizes the efforts of the United Nations to intercede on behalf of the rights of the Baha’i community. For example, the resolution refers to a statement (A/RES/67/182) adopted in December, 2012, by the United Nations General Assembly calling upon the government of Iran to “eliminate discrimination against, and exclusion of… members of the Baha’i Faith, regarding access to higher education, and to eliminate the criminalization of efforts to provide higher education to Baha’i youth denied access to Iranian universities,” and “to accord all Baha’is, including those imprisoned because of their beliefs, the due process of law and the rights that they are constitutionally
guaranteed.”

The actions of the government of Iran are concerning to people of conscience around the world.

Under the International Covenant on Economic, Social and Cultural Rights, signatory nations have agreed to “guarantee that the rights enunciated in the present Covenant will be exercised without discrimination of any kind as to race, colour, sex, language, religion, political or other opinion, national or social origin, property, birth or other status.”

According to Congress.gov, House Resolution 109 has been assigned to the House Subcommittee on Middle East and North Africa. There has not yet been a recorded vote. So far, Rep. Lankford is the only member of Oklahoma’s congressional delegation who has stepped forward to support the resolution.

Our Letter to Rep. Lankford

Thank you for becoming a co-sponsor of House Resolution 109, which supports the rights of religious minorities in Iran.

As the resolution points out, religious freedom for all people is a common value of the world community. The United Nations has repeatedly upheld freedom of religion as a universal right. It is entirely proper for the United States Congress to reaffirm its support of these values and principles.

As an Oklahoman and as a supporter of American leadership in the United Nations, I am especially happy to know that one of our Members of Congress from Oklahoma has decided to become a co-sponsor of this important resolution.

On behalf of all the members of the Oklahoma City chapter of the United Nations Association, I would like to say “Thank You” for your support of the Baha’i community in Iran and the religious rights of people everywhere.

3 Front-Runners Would Surrender U.S. Leadership in the UN
Commentary by Bill Bryant, Director of Communications, UNA-OKC

Republican voters in Oklahoma will choose their party’s nominee for the U.S. Senate seat that is being vacated by Dr. Tom Coburn. A primary election is scheduled for June 24th.

These Oklahoma Republicans aren’t like any of the Republican presidents in the last 60 years. If you rely on party labels to inform your vote, you can forget much of what you know about Republican tradition when you consider these three politicians.

The novelty of the Republican front-runners is most striking when they talk about American leadership in the United Nations.

Foreign policy has traditionally been an area in which Republicans have sought an advantage over their Democratic rivals.

In 1952, for example, the GOP nominated Dwight Eisenhower to run for president under their banner. Eisenhower was a political newcomer — but, he had the advantage of a heroic military career. He was widely acknowledged to have instant credibility in the field of international relations. As a result, the Republicans won the race for the White House that year. For the next 60 years, winning Republican presidential candidates have been careful to burnish their credentials in the areas of diplomacy and engagement with the world community.

Five Republicans have held the White House since the time of Eisenhower — Nixon, Ford, Reagan, Bush I, and Bush II. While the specific policies of these men have varied greatly, the common denominator was their willingness to accept America’s role as a world leader. For example, no Republican presidential nominee has ever rejected America’s leading role in the United Nations.

As reported by the Associated Press: “While each candidate tried to distinguish himself, they agreed on numerous topics, including ending U.S. involvement with the United Nations….”

Candidate Brogdon was the most outspoken in his opposition to American leadership in the UN. The Red Dirt Report quoted Brogdon as saying that he wanted to shut the United Nations down and “run them out of New York City.”

(Brogdon’s anti-UN stance isn’t new. In 2005, he introduced a measure in the State Senate that would have prohibited the display of the United Nations flag on any tax-supported property).

Lankford’s position on the UN has been more ambiguous. When he was newly elected to the U.S. House of Representatives, he complained about the United Nations to an audience of constituents: “It’s astronomical the billions of dollars that we pour in for communication for a group of people who gather on our soil and abuse us all day.”

More recently, though, Mr. Lankford admitted in a private correspondence to a constituent that the amount of American contributions to the UN is somewhat less than “astronomical.” In fact, he acknowledged that U.S. taxpayer support for the UN is only about $5 billion annually.

“Some have suggested that eliminating financial support to the UN will balance our federal budget.  I disagree.  With an annual deficit over $600 billion and a federal debt of over $17 trillion, it would take the elimination of funding for all federal agencies, plus the Department of Defense, to even come close.”

As for former speaker T.W. Shannon, his campaign website gives scant attention to public policies of an international nature. He advocates a policy of “peace through strength,” which was a popular doctrine prior to 9/11/01. Reflecting the war weariness of many Oklahoma voters, Mr. Shannon hints that he will oppose new military adventures:

“America should not play policeman to the world, especially not with American troops under U.N. command.”

(For the record, according to the UN’s Department of Peacekeeping Operations, there are a total of 83,841 UN peacekeeping troops deployed in 17 missions around the world. The count of American troops who have been assigned to UN peacekeeping missions is 30. That’s as of March 31, 2014).

In contrast to the Republican presidential tradition embodied by Eisenhower – Nixon – Ford – Reagan – Bush, this year’s crop of Oklahoma Republicans might be compared to a collection of foreign policy amateurs. None of them has served in the military. None has any international policy experience — except for Mr. Shannon, who served for a while as the chief administrative officer for the Chickasaw Nation.

By expressing their willingness to end U.S. involvement with the United Nations, they seem to be signaling their intent to support a “go it alone” global policy — leaving America’s allies to fend for themselves in the United Nations, effectively turning our country’s back on a long and successful tradition of multilateral engagement.

As a thought experiment, one might wonder how America would tackle the threats of nuclear and chemical weapons, the safety of our allies, and other global security challenges (terrorism, piracy, etc.) without taking part in the UN Security Council and other UN forums. Who would we rely on to represent our interests in the UN? Japan? Israel? The United Kingdom?

One quickly realizes that a one-sided surrender of American leadership in the United Nations would not be a solution to anything. Rather, it would be a dangerous flirtation with foreign policy isolationism. It would be, in effect, an abandonment of one of our best tools for promoting global security and international burden-sharing.

The United Nations Association doesn’t engage in partisan politics, and this commentary is not an endorsement of any candidate. Our mission is to educate, inspire and mobilize support for the values and vital work of the United Nations.

For a collection of Presidential quotes about American leadership in the United Nations, please see our website:

This is just a little item in the Big Scheme of Things.

Sometime within the last month, this blog recorded 10,000 pageviews. It’s a significant milestone for this little corner of the internet.

Our first post on this blog was published on July 14, 2012. Since then, we have offered news and commentary on topics ranging from human trafficking to the rights of people with disabilities to “Agenda 21” — and more. 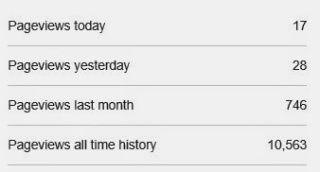 We like to think that our posts through this medium have contributed to the mission of our Association — To educate, inspire and mobilize support for the values and vital work of the United Nations.

< Previous Next >
+ Add your own event Eventbrite