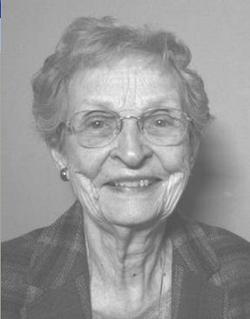 In October 1945, shortly after the end of World War II and at the time the charter of the United Nations was being signed, I was a young housewife in Denton, Texas.  We had just gone through the trauma of the war, and I remember the hopeful feeling that a peaceful world was on the way, and that the United Nations would make a difference.  For all these years since 1945, I have been a staunch supporter of that organization.  Some time after we moved to Edmond in 1992, I was delighted that there was an Oklahoma City chapter of the UNA-USA to which I could belong.
The UNA-USA mission, which draws me to want to help, is:

There are many things I like about being a member of our chapter.  I appreciate the fact that its membership includes persons of many ethnic backgrounds and persons of different religious faiths.  The membership is inter-generational and represents a variety of vocations and opinions.  I’m grateful that the UNA-USA affords me an opportunity to become better informed about the activities of the United Nations and the whole world scene.  It’s good to be a part of an organization where all the members obviously share a love of our nation and of the world and want to have a part in helping our nation to live up to its highest ideals.
Being a member of the UNA-USA is extremely important to me because it makes me feel I am part of a huge, centuries-old movement of humankind, a movement of people who are convinced that there are better ways than war for settling national disputes.   Even as long ago as 1795, according to an article I read about the League of Nations, Immanuel Kant had proposed the idea of a league of nations to control conflict and promote peace between nation states.  After the Napoleonic Wars in the 19th century, the Concert of Europe was developed in an attempt to maintain the status quo between European states and thus avoid war.  All through the years since those earlier days, there have been movements and organizations whose purpose has been to avoid war and to discover ways that the nations of the world can work together for the benefit of all. The road to a method of avoiding war has been a long one,  and I feel that the United Nations is our current hope.
I’m reminded of a meditation by Oscar Romero, a priest in El Salvador, who was shot and killed because of his work with, and protection of, the poor in a time of brutality and political upheaval in his country.  He reminds us that change is often not quick and that unswerving commitment will be required.  I’m quoting here a few lines from that meditation:
It helps now and then to step back and take a long view. . . .
This is what we are about:
We plant seeds that one day will grow.
We water seeds already planted, knowing that they
hold further promise.
We lay foundations that will need further development.
We provide yeast that produces effects beyond our
capabilities.
We cannot do everything and there is a sense of
liberation in that.
This enables us to do something, and to do it very well.
It may be incomplete, but it is a beginning, a step
along the way. . . .
Being a member of UNA-USA helps me to feel that I am a part, even though just a small part, of this huge movement of humankind toward a peaceful, caring world community.